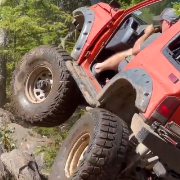 So this turned into a saga with a happy ending..... In between re-organizing my bomb-site of a garage after filling it with a used pool over winter, my Lincoln welder has gone missing. So I ended

I got everything buttoned up tonight, and the old girl made it out of the garage. Will test on it in the daylight.